Rebekah Laur'en announces the re-release of her first album SOBER.
First released in September of 2016, Rebekah Laur'en, after experiencing heartbreaks from ex lovers, friends, and even family, she wrote an album exposing her pain and sharing her process of healing. 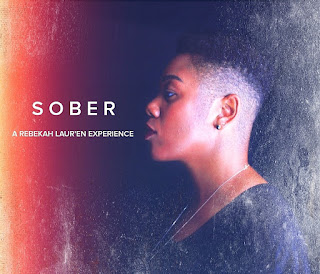 Rebekah Laur'en has reproduced and recreated the album, SOBER showcasing her original compositions and production. This re-release is a representation of the full development of belief in self. Rebekah Laur'en states:  "I didn't believe in myself when I first released the album back in 2016 which is why I asked another producer to produce the first project and although the producer was talented and amazing, it was not my sound  but through out time I've come into a different place with myself personally and professionally as a musician and as a person which reflects much of my growth and healing."

Rebekah Laur'en recorded most of the album in her studio in VA. She kept some of the original songs that were collaborations with other producers such as, New York City Producer, LonzCity who produced the song "Dicentra" and Producer, Z. Gates who worked on tracks like "Escape" and "Confessions".

SOBER is composed of 11 Tracks, each being it's own song while yet sticking to the solid story line. From the textures to the colorful sounds of her own unique touch to her music, you can't help but get lost in the flow of her music, lyrically and rhythmically.

Rebekah Laur'en hopes that this album does for others what her music did for her in hard times and leading them to the process of healing. This is just the start for her as she is also journeying into her own indie label Sound Proof 4. With Sound Proof 4, Rebekah is recruiting artists healers who also bring about social awareness and a spiritual, mental and physical sense of liberation.

Rebekah will begin a  tour in the fall!  To keep up with dates, cities and locations go check her website: www.rlmusik.com and follow her instagram where she will be making constant updates: r.l_music.

For an Exclusive peek into the album, SOBER, join Rebekah at the SOBER, album release party presented by Honey-Coated NightLyfe. 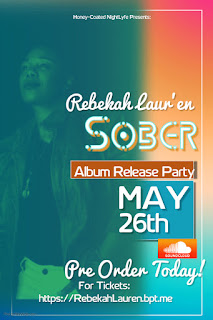