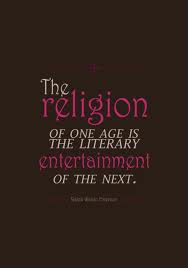 I know that this posting will step on toes, bunch panties, and send spit slinging from the mouths of those holier than thou's. May I recommend your reading stops here or at least put your shoes on....Religion...a phenomenon that I personally struggle with. My struggle isn't nor has it ever been a spiritual one...which allows me to speak freely and without conviction about things that occur for the sake of religion. My bout with religion began when I came to the crossroads of truth and knowledge. My upbringing in the Black church taught me a plethora of double standards and methods to cover up. It has also equipped me with lessons that are meant to control and oppress. One said lesson is that women are supposed to submit to men and that men are to protect and provide for their home. The truth of my reality didn't align with this knowledge. Aside from that I was taught that good always prevails, and again that knowledge didn't align with my truth. This may cause anyone that's on a quest for truth through knowledge to stop and ponder. I begin to wonder if every thing that I was taught a lie, then I have been living a lie based on knowledge that doesn't prove true. Certainly, we can examine empirical data that may actually prove a theory of knowledge, but it could never disprove what has been proven true through experience. This isn't limited to my personal experience, rather a myriad of experiences had by culturally and racially different yet like people. I have laid religion down because of its hypocrisy, misogyny, and oppression. Biased as it may be, I have also questioned the sanction of religion because of its interpretations, misinterpretations,  translations, mistranslated books, and omissions. How does anyone what is true and what is merely a fabricated clause in what's alleged as God's words? Historians, scientists, Darwinists, and Evolutionists have yet to come to a common consensus on what is truth or just a conscious pool of knowledge.

In the 21st century much of the disharmony, chaos, and wars experienced has always been religious based. The 911 attacks on the surface were about money and which leader had the biggest balls, but attacks were targeted toward those who could be identified as Muslim. Lets go back a little further. Religion was used to control and suppress Native Americans, Blacks and any other minority group. Slavery was maintained for religious reasons. Religious disharmony is embedded in this country's very fiber. According to Bill Moyers (12 Rules for Mixing Religion) Religiously, then, the “melting pot” is clearly not melting, and shouldn't  instead, it bubbles and boils with ferment, conviction, diversity, and, yes, theological competition to shape the public sphere and government. The religious scholar Elaine Pagels stated, “There’s practically no religion I know of that sees other people in a way that affirms the other’s choice.” Or its politics. 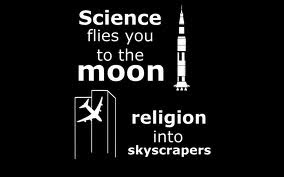 It is important, therefore, to keep reminding ourselves that in the Abrahamic tradition the first murder arose out of a religious act. Adam and Eve have two sons. Both brothers are rivals for God’s favor, so both bring God an offering. Cain, a farmer, offers the first fruits of the soil. Abel, a shepherd, offers the first lamb from the flock. Two generous gifts. But in the story God plays favorites, chooses Abel’s offering over Cain’s, and the elevation of the younger leads to the humiliation of the elder. Cain is so jealous that their rivalry leads to violence and ends in death. Once this pattern is established, it’s played out in the story of Isaac and Ishmael, Jacob and Esau, Joseph and his brothers, and down through the centuries in generation after generation of conflict between Muslims and Jews, Jews and Christians, Christians and Muslims, so that the red thread of religiously spilled blood runs to every place where religious folk turn from compassion to competition. Religion has a healing side; we know this. But it also has a killing side. In the words of Pennsylvania’s founder, William Penn, “To be furious in religion is to be furiously irreligious.” 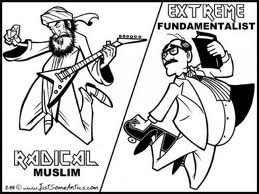 Moyer's goes on to state that, "Democracy tames the militancy of religious fervor as part of the Enlightenment tradition and on a more practical basis through a necessary tolerance for compromise (necessary to avoid what Europe experienced through long periods of religiously inspired strife). But because every religion conveys possible ways of expressing human experience and self-understanding, and because each can be utterly incomprehensible to the other, we are facing what Gerald Burns describes as a “contest of narratives.” Our country fairly seethes with talk about political religion and politics, much of it designed to confuse rather than clarify, to inflame rather than inform. So how can we convict and crucify something that we truly don't understand...How can we, when its not meant for us to? At this point, for me the doctrines of religion are null and void. I believe in God...yesterday it was Allah's today it may be Buddah's God, tomorrow, Jesus' God. What has remained constant is the fact that there is a God and he has a message. If I begin to live what I have been taught then my truth is that I can pick and choose who's God I want to worship based on the circumstances in my life....because that is what knowledge's history has taught me. It is unfair to choose the message to control the person and the person not use a message to justify the situation. This fleeting notion of who and what is "right" based on when and where is common place in this world, especially in America. Its found in educational, political, religious and social aspects of our culture. 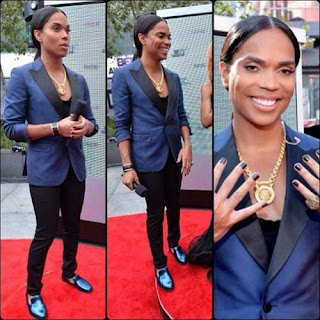 When you think of entertainment, especially amid the technological advances, activists progressive movements and enforcement of our Constitutional freedoms that religion wouldn't rear its ugly head so much. But in recent events it has not only showed itself it continues to take shits on those who refuse to fit in religion's box. The BET Awards 2013 displayed this in two specific instances. With the slogan for this year's show being "Anything Can Happen", we couldn't have expected for actually did happen to happen. I want to begin with the B.Scott refusal. Upon his arrival this Androgynous diva gay man, was immediately knocked off of one of his career milestones. After being invited by BET to host the Pre-show, he was ripped from the red carpet and demanded to change his look to a more "viewer" friendly one. After obliging, it was later deemed that he wouldn't be permitted to carry out his job because he was replaced by someone viewed as "more appropriate". Though B. Scott, has been supported by the likes of Elise Neal, Funky Dineva, Kandi Burruss, and Nicole Ari Parker this "miscommunication and misunderstanding" according to BET has been more damaging to the LGBT movement and diversity's mission. So the age old question is why did they do it? Who was responsible for suggesting and approving such a low blow passed off as a merely a miscommunication? Other than a half hearted apology, what has been offered to give B. his opportunity back, how can they or have they offered to help him surpass the milestone he reached on his own? My guess is nothing. I'm also willing to bet that the reason for not allowing it was one of religion, cultural insensitivity and sexism. YES...this is a matter a sex as well. Was it fear that it would make some men and women uncomfortable with looking at a man dressed as a woman? Or was it that the church folk didn't want to see a homosexual on the television? Is a gay man on television only ok when they are delivering catty punch lines, designing an outfit, home or styling some one's hair? I would like to know the real reason that this occurred. The funny thing is that B. Scott is still behaving Christian like with a heart of forgiveness and willingness to work with the very people that shun him.

As I was researching the B. Scott incident, I ran across commentary (defending B) but shunning Meagan Good for a very sexy dress she wore. So I begin to dig a bit deeper... When I saw this beautiful blue gown, my heart dropped because it is a masterpiece and around her 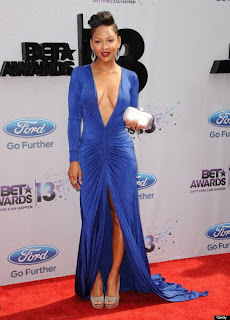 chiseled soft frame did the dress even more justice. I certainly didn't understand the big deal with the dress on a very confident and sexy woman. Ok, I get that she's married to a pastor and was presenting the Gospel Award, however, where is it written in the Bible that a woman cant have sex appeal? I'm sure that there is one that says "Women should dress in an unattractive manner as not to tempt the saved and holy men of God." The sexism and misogyny in religion is destroying the fabric of what all Good Books say is our purpose: to love and uplift one another as a means to serve and arrive at the place ordained by God. Yet because she wore this peek-a-boo gown, she's not "saved" enough to present the award, let alone be married to a pastor? I'm wondering as anyone seen that reality show on the lives of Pastor's Wives, the Sisterhood? If we want to question something and unsaved I think we should start there. Religion's hypocrisy teaches us that men can do outlandish, despicable things but women have to obsess over what to wear that isnt too offensive??? Where does it state that we are equipped to judge?

When Religion does more harm than good, is when I will reconnect with it and all of its notions...as I type this I walk into another truth...its not religion that is committing the sin, its the followers of religion...is that sin embedded in its doctrine??
-MsNightLyfe
"Buzzworthy Cravings, Creatively Satisfied!"
Posted by MsNightlyfe at 3:49 PM