EDEN is excited to announce our weekend headliner!  Grammy Award winning recording artist EVE is coming to the garden of EDEN to perform LIVE!!!!!! Her new album just dropped on May 14th, Lip Lock. and she will be at EDEN at the end of June! Not only will she performing music from her new release but she will also be selling and signing CDs after her show.  So get ready, get set GO!  It is gonna be an amazing weekend! 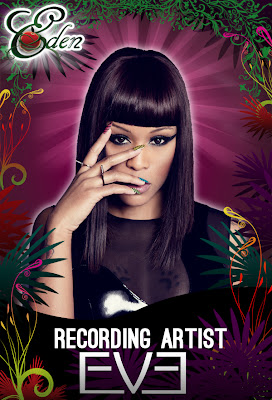 And when she hasn’t been making music, it’s not like Eve has been out of the spotlight — the hip-hop star has been making her mark in film (Barbershop, Vin Diesel’s xXx, Whip It), on TV (with her own show, Eve, and in guest roles on shows such as Glee), with fashion (her own line, Fetish), and as a guest star on a number of big-name musical projects (Gwen Stefani, Ludacris, Maroon 5…the list goes on).
But Lip Lock, the Philly native’s fourth album, marks the singer’s confident return to music under her own label, and some new songs in tow.
So what’s behind the rejuvenated spirit?
“I reconfigured my life,” says the singer. “And I took time to record, and just feeling right artistically. The good thing is, right now, I feel it.”
Having moved to London, Eve’s headlining return to the music world comes with new sounds and collaborators, while still maintaining the edge of her first three records. As Eve says, “I call the new record Lip Lock because it’s about locking the game back down.” Consider it locked.
You can trace Lip Lock’s musical themes all the way back to Let There Be Eve: this is still the work of a strong artist and a fierce rapper not afraid to make a few musical left turns. The percussive fury of “All Night” is tempered by the cool synths of “Keep Me From You,” f/ Dawn Richard. There’s some powerful boasting (“Mama in the Kitchen” f/ Snoop Dogg) mixed with perfect pop hooks (“Make It Out This Town” f/ Gabe Saporta). Also featured on the album are Pusha T, Juicy J and Chrisette Michele.
Lyrically, the record feels confident, not angry. “The overall theme here is strength,” says Eve. “There’s aggression, like my first record, but it’s different. I’m in your face, but I don’t need to prove anything. It’s not anger, it’s feeling my strength, being a strong woman.”
With “She Bad Bad,” a take-no-prisoners anthem, likely to scare off pop radio, Eve claims, “We wanted to start out with something viral, something different. It definitely is getting people talking. I mean, I didn’t want to leave my core audience behind, but I did want to build a bridge from Ruff Ryders to where I am now.”
The most interesting track may very well be “Make It Out This Town,” a collaboration with Cobra Starship front-man Gabe Saporta and produced by Claude Kelly. “It’s got a really, really big hook,” said Eve. “Working with other musicians can be exciting as it gives the songs a different energy.”
To coincide with Lip Lock’s May 14, 2013 release, Eve will be launching a tour of the U.S this summer. “I’ve been performing in Europe, Asia and all over the globe really for the last few years and so I can’t wait to come back to the States,” says Eve.
And most of all, the singer hopes to use the lessons she learned early on to conquer the music world once again.
“I had to tour, gain respect, do the underground/street kind of thing,” she says. “The underground is still there, but at the same time, I think there’s a lot of artists today that haven’t gone through that. There’s superstardom before they leave the bedroom. I appreciate that I had to work for it—and that’s what I’m still doing.”