When it comes to reality television there's a myriad of opinions, just as there are of anything revealing the ugly truth forcing the sleepwalkers to really look at their pretty lies. This makes people uncomfortable. While the focus here could be on the hate spewed at all things different or "abnormal", its imperative that revolutionary accomplishments be highlighted. After all it is Black History Month and the month of love and us here at Sweet Tooth Media, just LOVE cultural trendsetters.

Browsing through the net looking for the latest in black entertainment and I run across this Huffington Post article on Laverne Cox. Laverne is the first African-American transgender woman to produce and star in her own television show. Getting her start on VH1's I Want To Work For Diddy, she made history being the first African American transgender woman to appear on a reality television. That led to her landing a starring and producing role in the spin off, TRANSform Me. Making her stride in history and on the screen, Laverne has appeared in the independent feature film, Musical Chairs in which she was nominated for the GLAAD Media Award, The Exhibitionists, and two movies not yet released, “36 Saints” and “Grand Street." Laverne guest starred on Law and Order SVU and other television shows. Ms. Cox has been quite the pioneer for LGBTQ representation in television. 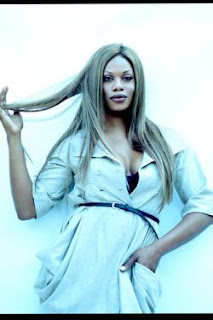 So, I find it rather alarming that she hasn't been supported by the very community she is providing a voice for. Laverne states that the Trans community heavily criticized her for her role in TRANSform Me. While she expected from the African American community she didn't from the community in whence she came. This is alarming in the age of the demand for equal rights for all citizens. As a devout and proud member of the LGBTQ community, I don't understand the cry for equality from those outside of the community, when inside of the community we're at such a disarray. Nevertheless, Ms. Cox shifted her focus from the opinion of others to self-love and acceptance. Reminding us all that our journey belongs to us and only us, anyone else is lucky enough to catch a ride. This re-routing of energy has led to various other opportunities for Ms. Cox and I'm more than interested to see the rest of her work with the world.