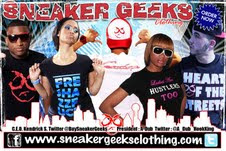 A sneakerhead is a person who owns multiple pairs of shoes as a form of collection and fashion. It is often manifested by the use of shoes primarily made for sports, such as tennis or basketball, as normal everyday clothing. The birth of sneakerhead culture in the US came in the late 1980s and can be attributed to two major sources: basketball and hip hop music (http://www.wikipedia.com/).  Raekwon's Sneakers pay homage to the Sneaker culture and the influence it has on Urban America:
'...Who wear it all I'm an Adidas freak Multi thousand pair of sneak freak Real fly physique that'll look yea , fat watch , live footwear Have the white folks displaying my gear....'
With this boom in the late 80's of signature basketball shoes; the rise of Michael Jordan, the shoes and the man; and the explosion of hip hop; those in the collecting subculture, were given options. Those options were given street value and credibility because of Hip Hop. We all have been guilty of desiring, aspiring and even envying things we see in music videos. As soon as we're old enough to work and start purchasing things on our own, the fashion, make up, jewelry and shoes that were once the objects of our affection become a status assigning possession. As our apparel wisdom and sneaker aficionados grow, we find that certain colors are only appealing if we have the exact outfit to match it. Depending on the fashion statement desired, one may not want it to coordinate at all, but still may feel that they are FRESHAZZFUCK, and want the world around them to know that. The sneaker culture runs deep and aside from camping overnight to get the freshest kicks, the appearance of it all, makes or break the shoe fetish. Although sneakers are what this culture is passionate about, other things highlight the sneakers, influence and cultural innuendos that include music, artist show case and independent clothing lines which are some of the different avenues that the urban and sneaker culture draw into. 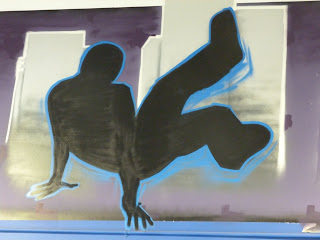 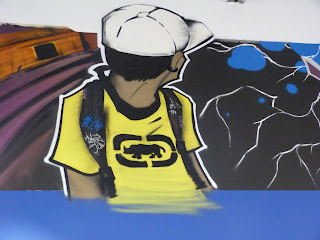 Kendrick SneakerGeeks Scott, Creator Extraordinaire of SneakerGeeks Clothing knows that the outfit makes one hell of a complement to the shoes. I mean really, what good are shoes if they aren't properly accessorized with clothes? I was able to catch up with Mr. SneakerGeek himself, to find all about the Sneaker Culture, his influences, and inspirations. Sneaker Geeks Clothing was created in 2009 by New Orleans own Kendrick L. Scott as an outlet to Express his love for Art, Humor, Creativity and most of all the Sneaker Culture. Being a lover of fashion and a Sneaker Enthusiast, it was only right that he share his passion with the world. Every design thoughtfully created and printed in Limited Quantities. The colorways are determined by Exclusive Sneaker Releases (http://www.sneakergeeksclothing.com/) . The beauty of Hip hop inspired fashions, interwoven in the sneaker culture is that it allows you to create your own style within a style. Kendrick tells SweetToothMedia that his interest in fashion begin in his youth. Growing up, there was always a need to be fresh. Even his mother realized his keen eye for coordinating, and had him helping her select outfits. This led Mr. Scott to a lifelong learning of fashion which included wardrobe stylist positions for various groups and organizations around New Orleans. Men and fashion has never been taboo for me, but when a man takes the initiative to define, refine and create their own line of fashion its astounding. Kendrick says "its important for young men to be fashion forward because the whole world is watching them..." He recalls in his youth, the release of exclusive kicks and having limited amounts of clothing to wear with them that allowed him to be an individual and how frustrating this was. Lets fast forward a few years and we are hit with the word SWAG. Kendrick's desire and inspiration lies in this word. He believes that Swag should represent one's own uniqueness and flair for appearance, yet it does everything but that. "Many young people believe that their swag is unique to them, when in actuality it isn't, its just the borrowed swag of someone else..." This goes hand in hand with being aware of your appearance, dispelling fashion faux pas, taking risks and being fashion forward. The word "Swag" influenced Mr. Scott so that he created a t-shirt design, Death To Tha Word Swagg. Kendrick says that if you have swag, there will be no need to go around screaming it, instead, others will notice it and attempt to borrow yours." As a fashion designer its important to duly note the message one's dress sends. Kendrick disclosed that in order for young men to be taken seriously, they must look the part. While his fashions aren't what one would wear to land a job, its definitely fit for those who have jobs, careers and the like and allows them to express themselves and embrace the culture that has colored their being. 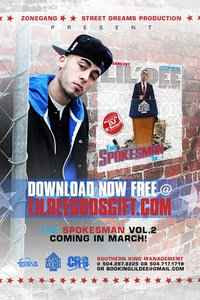 Sneaker Geeks Clothing includes t-shirts, hats, tank tops, and soon to include socks. Kendrick lets us know that his designs are all about comfort. After a days work, and a decision to step out, doing so comfortably is a must...especially if one just copped the latest most freshest pair of sneakers. Mr. Scott feels that his designs are created to complement the exclusive shoe releases and makes outfit selection that much more comfortable. Mr. Scott says that in order to release a grand selection requires tons of research. This process isn't easy, as communication, coordination and the like must take place weeks before release dates. Designing includes planning and staying abreast of client demands. Currently the demographic targeted are hip-hoppers between the ages of 18-27, yet, the sneaker culture has no age limits. Sneaker Geeks Clothing designs aren't just limited to color schemes and pallets, it also captures creative concepts that the real Sneaker Geeks speak. The slogans that are found on Sneaker Geeks Clothing include catchy phrases, hip-hop influenced lyrics, and anything that keeps the culture embedded in growth, positive self image, and awareness. The clothing line includes items for men and women, however, the operating principal is unisex clothing. Being the feminist, activist that I am, I wanted to know if Mr. Scott plans to expand his line specifically for ladies. He disclosed that he plans to occupy that lane, with the same premise in mind, of comfort, bold colors, and high quality clothing. There are plans for Sneaker Geeks Clothing to expand the line to include jackets, children's clothing and of course the ladies line. When asked if there was one celebrity that he could choose to represent his line of clothing, Mr. Scott shared that it would be the artist, Wale because he embodies the vision that carries Sneaker Geeks Clothing. Currently, you will find celebrities in their own right, Kiotti and Lil Dee God's Gift representing the HEARTS OF THE STREETS and Sneaker Geeks Clothing, looking FRESHAZZFUCK! 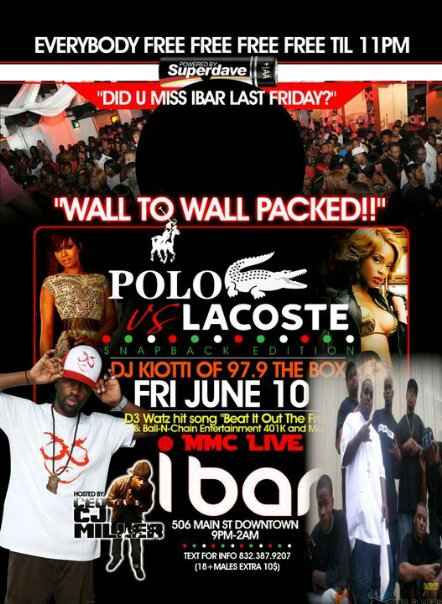 You would think that as an up and coming clothing designer, there isn't time to do anything but design. Well Mr. Scott is on his way to becoming Entrepreneur of the Year. Being a strong force and designer, in the Sneaker Geek movement, its rather strategic to adhere to the demands of those that keep the movement going. That strategy is music. The Sneaker Geeks brand is now attached to a mixtape compilation highlighting artists from New Orleans to Houston. This mixtape entitled Sneaker Geeks Clothing Presents: Heart of The Streets Mixtape, featuring his favorite artists and is mixed with club, deep soul, and lyrical assortments is scheduled to be released for download on June 11, 2011. In addition to Mixtape production, Mr. Scott has just launched his summer collection, which have already been released in New Orleans and can be found at D Sixty VII Boutique (400 S. Broad Ave Suite B) in Mid City New Orleans and Mad Soulz located in Oakwood Mall. Existing yet limited quantities can also be found locally, in Houston at Urban Zone stores. There is even buzz that Sneaker Geeks Clothing will be featured in stores in Miami, Florida. His dream of Going Global, is well on its way, and the legacy pen is moving swiftly. Speaking of legacy, Mr. Scott is the father of a young son, who acts as his source of motivation and his son's existence even before birth, has ignited and routed the fire to make the Sneaker Geek Legacy a powerful one. The message that he wants his son to take away from his work is that he can do whatever he wants in life. In addition to that, Kendrick wants his son to remember to give back and use his roots to keep him deeply embedded into who he is and what he will become. You can find Mr. SneakerGeek giving back, by partnering up with organizations such as an All Girl Power Movement as well as endorsing, hosting events, marketing, participating in clothing giveaways to spread awareness of issues that plague the very community that composes the Sneaker Geek Culture: Urban America...Hip-Hop! 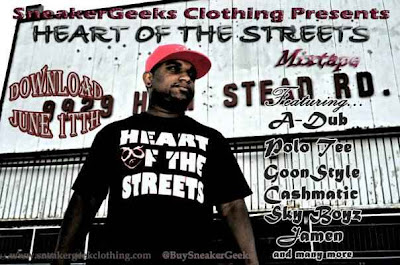 Check out Mr. SneakGeek, Creator Extraordinaire, Kendrick Scott, as we interviewed at Urban Zone Store located at 4400 North Freeway. To see what's new and to order your SneakerGeek Wear visit http://www.sneakergeeksclothing.com/ This creation is truly the Hearts Of the Streets and well Mr. Scott, I'll see you on the other side of Globally! Salud Sir. -MsNightLyfe 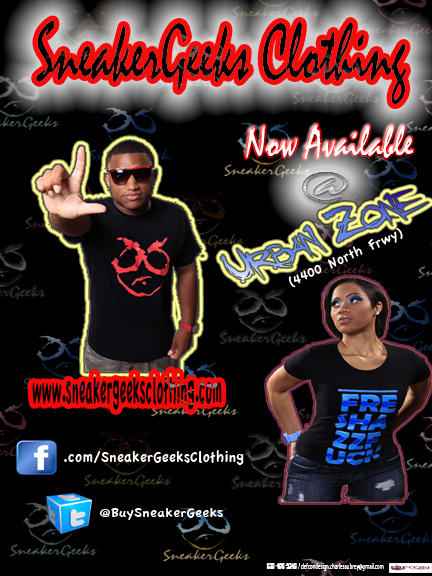