Straight Outta Responsibility: When Will We Educate Our Own 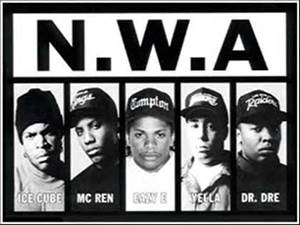 So as the movie Straight Outta Compton has hit movie theaters many have already expressed their reviews. The movie grossed 56.1 million which means there was plenty to say about it. Majority have given it rave reviews however that's not everyone. My best friend tagged me in a very interesting review on Facebook where one young man felt as if N.W.A were not the evolutionist that the community has made them out to be but actual sell outs. This came stemming from another blogger.  He states while there were multiple rap groups promoting to end violence such as Public Enemy and Boogie Down Productions between the mid to late 1980's you had the group N.W.A (Niggaz With Attitude) who were pushing a different agenda, the agenda of those looking to destroy the black community. When the group formed with Easy-E and their manager Jerry Heller it is stated that out of the gate the group was formed to overthrow conscious hip-hop with gangsta-ism and that's something they took pride in.

Songs such as "Fuck the Police" and "Gangsta Gangsta" focused on things that we are currently all to aware of and that's racial profiling and police brutality. Which eventually was given the title of gangsta rap or "reality rap" as N.W.A called it. It was reality to them because this is exactly what their environment was filled with, drug invested neighborhoods, crime, and little to no respect for woman, so this was real life for them. It was this form of rap that the blogger feels as was "black genocide" because they chose to highlight their environment. For me this is where I feel different. I agree listening to N.W.A puts you in automatic "gangsta" mode, ready to go out and demolish every dirty cop on the street, but lets be honest with the current events happening lately, we didn't need assistance on it. I agree music is the influence of life however it doeskin have to be. I don't understand how this one particular group is the entire reason why our community is still the same.  At what point of time do we stop putting the blame on everyone else but us.

Now please don't take that statement wrong, we as African-Americans are NOT responsible for the unnecessary killing of our young black me and women, but does N.W.A have the answer or is responsible for coming up with a solution, It would be different if they presented themselves as a black conscious rap group, however out the gate they stated their style "gangsta" or "reality" rappers. The blogger then begins to say that "instead of spending our money supporting the movie we should be buying books about the Black Panther party and other revolutionist who really stood up for police brutality." What i think the blogger is missing is that each revolutionist did not go down without a fight, a bloody fight at that. The Black Panther party chanted things such as "The Revolution has come, its time to pick up the gun, off the pigs". While N.W.A had quotes such as "And when I finished, it's gonna be a bloodbath, of cops dying in L.A. (in which the Black Panther movement started in Oakland), similar much. However this what you want us to reference.

To end this I want to state my stance and possibly offer a better solution. This education has to start somewhere and what better place to start than at home. Home is the start of how you will eventually live your future years. You don't have to be a product of your environment, I went to college, currently working the career that makes me happy and getting money the legal way, so all is not lost. I was able to accomplish this with a mom who encouraged and pushed me to be better than what is around you. I live in the drug invested neighborhoods. I have went to the schools where educational materials were short and teachers who were just on the clock for a check not concerning themselves with educating our youth. My mother made me aware of those things and goals outside of that environment and daily I fight to strive for better. That doesn't make me in less aware of the constant misdoing against the lower class community. If anything I want to do all that I can to educate with the knowledge I know and spread it abroad. Is it my responsibility? As long as I have a mother who still stay in the same neighborhood, as long as I have 2 black nephews, and as long as I wake up every morning, yes. However I refuse to let what is played on the radio be the expectation of what our future can follow, because you have current artist such as Young Thug who has stated that he is only doing this to make money. I will do what i can, I will research day and night, I will memorize what is within my legal right and then I will go out there to spread the knowledge to others. I will take responsibility and NOT place it in the hands of others. I wont just talk about it but be about it, and that is how the "black genocide" can end by the faithful saying "if you want something done right, do it yourself."