Press Release :Sometimes It Snows In Atlanta A Stage Play 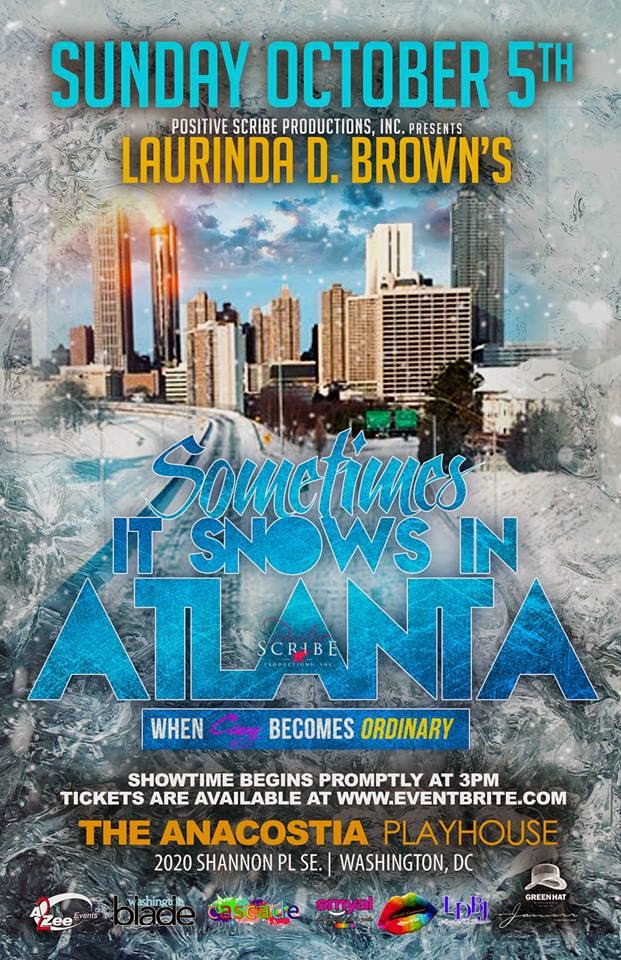 September 2, 2014 - Positive Scribe Productions, Inc. and award-winning author Laurinda D. Brown will be bringing the production, “Sometimes It Snows In Atlanta,” to Washington, DC, Sunday, October 5, 2014, at 3:00 p.m. at The Anacostia Playhouse, 2020 Shannon Pl, SE.
I have a question for you. What happens when all that’s crazy in your life somehow becomes ordinary?
Simon and Schuster/Strebor Books national best-selling author and playwright, Laurinda
D. Brown’s fourth theatrical production, “Sometimes It Snows in Atlanta,” addresses mental health in both the African-American and lesbian, gay, bisexual and transgender (LGBT) communities. It is a known fact that mental health challenges are still stigmatized in the 21st century.
With the combination of homosexuality, mental illness, race, gender and socioeconomic pressures, there lies further stigmatization by our society. Sadly, these topics are considered taboo, especially in the African- American community, and often go unaddressed and untreated.
“Sometimes It Snows in Atlanta” confronts the aforementioned issues amongst three couples – gay, lesbian and transgender - as they partake in various therapy sessions which address depression, obsessive- compulsive disorder (OCD), bipolar disorder, post-traumatic stress disorder (PTSD), and anxiety disorder. The play is set in Atlanta, GA during the first week of April 2009. It snowed on April 6, and, what seemed crazy for those new to the Atlanta area was actually ordinary for Atlantans.
An award-winning writer, Laurinda discovered her best stories are ones she personally experienced. On that 6th day of April, a bout of depression manifested itself into Laurinda’s life and into the lives of her children,
beginning with an overdose of Hydrocodone. Ironically, her children, in their innocence, as they enjoyed the rarity of the snowfall, were outside creating snow angels.
Advance purchase tickets are now on sale at www.eventbrite.com for $30 each for this groundbreaking production. Limited walk-up tickets will be available at the door for $40 per person. VIP tickets are available for $50, and the price includes preferred seating and a gift bag. A portion of the proceeds will benefit the Coalition of Activist Students Celebrating the Acceptance of Diversity and Equality, CASCADE, Howard University’s organization of bisexual, lesbian, allied, and gay students and the Supporting and Mentoring Youth Advocates and Leaders (SMYAL) organization in DC.

Due to mature subject matter, attendees must be 18 or older to enter. There will be a reception immediately following the performance.
Come experience what happens when crazy becomes ordinary.
Learn more about Positive Scribe Productions, Inc. by visiting www.positivescribe.com