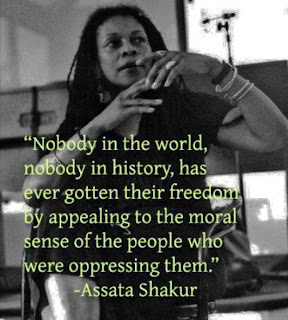 Imagine your picture adorning the walls of police headquarters, post offices, and worst of all the FBI's top wanted list and underneath the picture, the caption reads: [YOUR NAME] is WANTED by the FBI for the heinous crime of being an educated, strong, phenomenal Black (Wo)man that is much to knowledgeable, assertive, inquisitive, proud and real. She/He has more education than the law allows with opinions and beliefs that are infectious amongst the people. Report this Political Prisoner IMMEDIATELY.... Seems ridiculous doesn't it? As farfetched as it seems this phenomenon is very real. Free Angela and All Political Prisoners is an amazing film that hones in on the existence of political prisoners, the causes and the effects it has on minority groups of people.

According to the Harvard BlackLetter Law Journal, prior to September 11, 2001, there were nearly 100 political prisoners and prisoners of war incarcerated in the United States. Political prisoners are men and women who have been incarcerated for their political views and actions. They have consciously fought against social injustice, colonialism, and/or imperialism and have been incarcerated as a result of their political commitments. Even while in prison, these men and women continue to adhere to their principles. This defnition of the term “political prisoner” is accepted throughout the international community (Vol. 18, 2002).  Many of today's political prisoners were victims of an FBI Counter intelligence program called COINTELPRO, which was created by then FBI Director, J. Edgar Hoover. The program consisted of series of covert actions directed against domestic dissident groups, targeting five perceived threats to "domestic tranquility". The five perceived threats included the White Hate Groups (1964-71), Black Nationalist/Extremist Hate Groups (1967-71) The Communist Party (1956-71), the Socialist Workers Party (1961-69), and the New Left (1968-71).  These groups were believed to be a threat to US policies and general way of life because they simply had an opinion different from the masses and voiced it proudly and publicly. Furthermore, this oppression greatly affected the treatment of blacks who refused to be "good niggers". Here is an edited copy of the FBI COINTELPRO regarding Black Extremist,  a 23 part report, which supports this ideation. 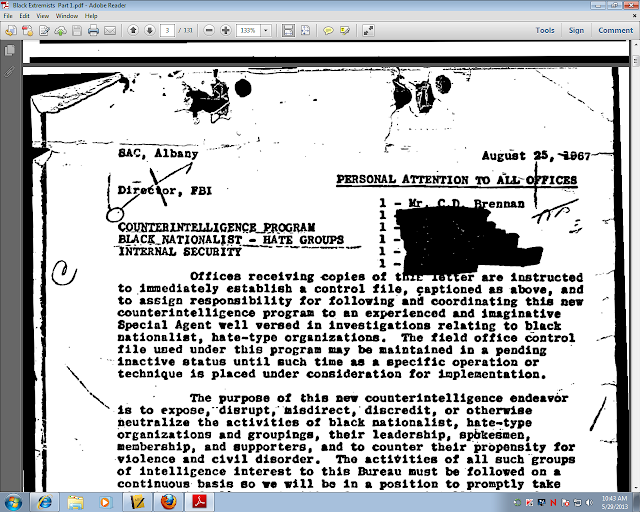 Free Angela and All Political Prisoners, is an intimate walk in the life of Angela Davis, an American political activist, scholar and author. As a former leader of the Communist Party and close relationship with the Black Panther Party, Davis was once on the FBI's Most Wanted Terrorist List. Of course those weren't the reasons listed on the notice...she was wanted and later arrested for her alleged involvement in the attempted jail break of , Black Panther Member and SOLEDAD BROTHER, George Jackson who was serving an 11 year sentence (7 of which was spent in solitary confinement) for the petty theft of $70 in which he died claiming his innocence. George's young brother, Johnathan Jackson, joined Angela and Black Panther members in their fight for Freedom and Equality for all and to hold on to the only real family he had....his brother. Because of Angela's voice and belief in reform and equality she quickly became a target. 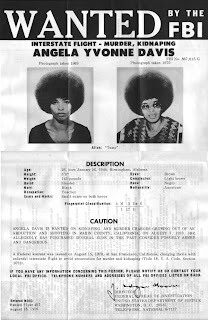 Her affiliation with the Black Panther Party and leadership with the Communist party was to combat socialism that grows from capitalism. She felt that as an individual she couldn't accomplish much radical reform, but felt as a Black Community standing unified we could demand and obtain fairness in all things. Based on this notion and the obvious conspiracy to wipe out the Black community, defending our right to exist equally became Angela's life work...in which she was unjustly jailed for. In the summer of 1970, Johnathan, who at the time was 17 years old entered a Marin County Courtroom and took a Judge, the prosecutor and three female jurors hostage after he armed two black defendants and they all walked out of the courtroom and quickly to a van. Before the van was completely off of court grounds, the police opened fire on the vehicle. Everyone in the van was murdered except for two of the three jurors taken hostage. Johnathan, was heavily armed with guns purchased just a few days before by none other than...Angela Davis. This implicated Angela and the hunt for her head was on. Angela was captured after a short stint on the run. She later served 18 months in prison before her trial but not before the prosecution wanted her to get the death penalty for all three murders (the judge, the prosecutor and the juror). Angela was later found not guilty of all charges and released from prison. Her real crime: Being the embodiment of Black Liberation, the government's imaginary enemy.

Here is this educated woman, who had lost her job and became America's target for her belief in freedom and equality and having the audacity to say so and stand with others that share the vision. In the film, it was disclosed that Angela had an affair with George Jackson during both of their imprisonments. This affair was the prosecution's argument for her involvement in this case.   His opening argument stated that Ms. Davis had uncontrollable passion because she is a woman and she too wanted her "man" to be free and this is why the Marin County Court massacre occurred. The question of the hour then is who was responsible for shootings? Angela Davis wasn't at the scene of the crime and the only reports of shots were those that came from the police. If the "Illuminati" was in existence then, I guess it would be safe to say that the murdered judge, prosecutor and jurors were sacrificial casualties in the war of knowledge and control. Aside from that, Angela Davis and other noted free thinkers/prisoner's of war such as Assata Shakur, Elaine Brown, and George Jackson endured the most extreme counts of legal, racial and political bullying and force. In the midst of this monstrosity, how is it then that "We" are free? Is freedom of speech and the pursuit of happiness limited to law makers and those that enforce them? Which leads more inquiry into the concept of democracy...the very principle that America wanted to protect...the very one that led to the unfair targeting and arrests of those that identified and disagreed with its practices. 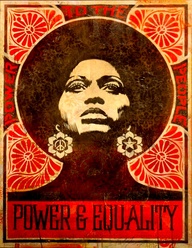 The oppression in which we live continues to thrive. Lets begin with what it took to get the film screened in theaters. This film, directecd by Shola Lynch , endorsed by Jada Pinkett-Smith, hasn't received any distribution. Aside from that, movie theaters across America are forcing organizations that wish to show the film to buy out theaters just for screening. America doesn't like the sounds its skeletons make and will stop at no end to make sure no one else is aware of their existence. Non-whites are given harsher punishments for the same crimes committed as whites. Assata Shakur is still on the FBI's Top 10 Most Wanted List and women are still the subjected to chauvinistic thought processes in the system of misogyny. Davis argues that the FBI’s latest move, much like its initial targeting of Shakur and other Black Panthers four decades ago, is politically motivated. "It seems to me that this act incorporates or reflects the very logic of terrorism," Davis says. "I can’t help but think that it’s designed to frighten people who are involved in struggles today. Forty years ago seems like it was a long time ago. In the beginning of the 21st century, we’re still fighting around the very same issues — police violence, healthcare, education, people in prison" (Goodman et al., 2013). It is in fact disdaining and terrifying to those involved with struggle and could be part of the reason for so much voluntary ignorance. As a people we have been divided and conquered. How dare we have an opinion, let alone try to be the change that we want to see....!  How can her "fight" be more radical that the times in which we live...amongst the elements that are stuck in time. Desperate time calls for desperate measures. Is it ok that the American government can use force to protect domestic tranquility as long as the "domesticate" stay in their place? America has taught us that its fair to justify crimes of violent force when the face in front of the smoking barrel is white. Protecting the republic's reputation takes precedence over protecting the people the make up the republic. How democratic is that?

"I think the importance of doing activist work is precisely because it allows you to give back and to consider yourself not as a single individual who may have achieved whatever but to be a part of an ongoing historical movement....As a black woman, my politics and political affiliation are bound up with and flow from participation in my people's struggle for liberation, and with the fight of oppressed people all over the world against American imperialism."-Angela Davis

"Knowledge can transform the practical, after truth forms the radical"- MsNightLyfe.

"Buzzworthy Cravings, Creatively Satisfied!"
Posted by MsNightlyfe at 11:51 AM