THE “NEW GAY” IN FILM
Red Carpet Film Premier of “Desire, Hostility, Delusion”, an Ink Media Film where films are created to focus on traditional life experiences, not the typical gay stereotypes.

(Houston, Texas) - Films that depict “Real Lives” and “Real Issues” in gay life could look like traditional families and their everyday issues. In the new film “Desire, Hostility, Delusion,” Writer/Director Lyndonne Payne, creates a storyline where the gay characters could easily be replaced with straight characters and the the issues would still be relevant. She is the newest break-out star whose hope is to create films that represent real world issues facing gays and lesbians to the big screen. Desire Hostility Delusion is our introduction into the lives of characters we will see once Payne begins filming a series that chronicles Real Lesbian Life. Payne says, “Films, where viewers can relate to the issues and appeal to any audience is the future of film making. The major differences are of course, the outcomes.“

In her Cinematic drama debut, Lyndonne Payne explores the lives of four women whose desperate attempts at achieving self fulfillment turn deadly. In the film, the character Gabby (Latoya Jarett) who is career driven and determined, takes violent and desperate measures to achieve her dream of having a child. Her partner, Cinematographer, Tess (Erica Gipson), is unwilling to give up the life she has worked so hard to establish; the two women find themselves in their ten year relationship with different agendas and aspirations for their future together. Their paths ultimately cross with Toni (Edith Morales) and Stacy (Charlene Cruse) who share a similar story. The film explores the issues of surrogacy, civil unions, domestic violence, friendships, addiction, loyalty, death and grief. These issues are faced in everyday life by individuals regardless of lifestyle. Hopefully, more film makers will make films that allow the world to see that gays and lesbians live regular lives and encounter issues that effect people in general.

Payne premier’s her debut film in her hometown of Houston, Texas where most of the actors reside. Payne, in collaboration with Star Management Group and Sweet Tooth Media has created a Red Carpet Screening Event which will feature 2 showings of the film.

The screening features a Champagne Reception Hosted by Performer and Activist, Mildred “DRED” Gerestant ( http://www.dredlove.com/ ) and a Meet and Greet with the actors during intermission. There will be future Red Carpet Screenings of the film in Dallas, Miami, Atlanta, DC, Las Vegas, New York and Chicago. To host a Red Carpet screening of this film in your city, contact Ink Media Productions: dhd@inkmediaproductions.com. Press materials available at http://www.desirehostilitydelusion.com/ 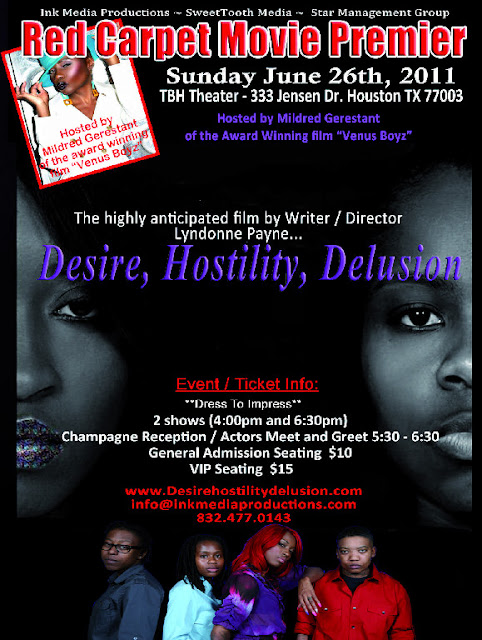 "Buzzworthy Cravings, Creatively Satisfied!"
Posted by MsNightlyfe at 10:02 AM